Oscar Pistorius, Caster Semenya, doping … name a crisis in global sports and the good doctor Tucker been there to step up and speak his mind. Hailed as the new Tim Noakes and unafraid of taking flack, he's the rising public intellectual of the sports world. 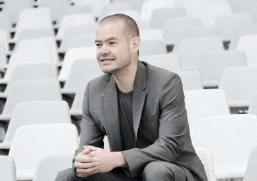 ‘If Dr Ross Tucker thinks he has the answers, then perhaps he would be willing to share them.’ Don’t you love it when people speak about you in the third person – while taking directly to you? It’s both weird and funny, and happens a lot. On this occasion, in more or less these words, it was in a letter from the then Minister of Sport, written as World War III loomed and South Africa reeled at allegations that its star in the women’s 800 metres, Caster Semenya, was a hermaphrodite.

Dr Ross Tucker, eminent sports scientist, 32, shakes his head in amused dismay. ‘I wrote back, saying, "Well, I am, and I have."'’ Am willing. Have spoken up. Am hereby doing it again. The retort implied a question: Jeez, what aren’t you getting?

Tucker’s publicly declared position, briefly, had been that whereas the Winnies and Juliuses oversimplified things by describing the allegations as racist, the Semenya affair raised issues about sporting ethics that were more complex than this viewpoint allowed. ‘There was a scientific reason to think there would be an advantage,’ he says, a question that had to be addressed in fairness to other athletes. On the other hand, whereas the Minister held that the science needed to determine the runner’s sex was ‘complex’, Tucker maintained that, here, the matter was ‘straightforward’.

‘I mean, honestly, it was one phone call to an endocrinologist and the problem would have been solved in two minutes.’

Or, as he said at the time, the story was getting in the way of the facts, many of which were kept quiet. The controversy was ‘badly managed within South Africa’, and Tucker was particularly incensed by the Minister’s remarks that ‘a third world war’ would erupt if Semenya were banned from international athletics – ‘just ridiculous, bordering on childish and reckless’.

When the letter arrived, it was to request that he cease airing these criticisms.

For the Minister, it seems, Tucker was a naïve upstart; for Tucker, the establishment was again ignoring qualified expertise and, it may be inferred, the honest aplomb of sport itself. A senior lecturer at UCT’s unit for Exercise Science and Sports Medicine (ESSM) and hailed by some as ‘the new Tim Noakes’, he speaks of the frustration he experiences in a country ‘with this enormously rich pool of talent’ but which ‘never quite gets there’, partly because the bigwigs are ‘not quite up to it’, that crucial job: ‘making those last, little investments’, ones at which sports science can excel.

There are ‘boring definitions’ of the discipline; the one he likes turns on the ‘half-a-percent concept’. Watch Usain Bolt win the 100 metres and you think, ‘Holy crap, he’s so much faster than everyone else!’ The trick is to close your eyes – and listen to the subtle music. The gun goes off, the seconds count down. At 9.58 seconds, Bolt crosses the line. A beep sounds, then another for second place, for third … What to the eye is a gulf separating Bolt from the others is to the ear a continuous stream of sound: beep-beep-beep-beep.

‘Sports science exists in the gap between the beeps. My job is to understand why there is a gap. If I’m in front it, I want to keep it; if I’m behind, to close it. What’s the difference between the guy who wins Olympic gold and the one who comes fourth? On average over the past 50 years it’s half a percent. That’s the difference between Bolt – legend, gold – and fourth ....’ He pauses. ‘Who came fourth?’

So, sure, personal trainers abound, but they’re not sports scientists as such; rugby teams have strength and conditioning people – again, ‘a separate classification’. And, yes, gigs do crop up. He himself was a part-time consultant to SA Sevens Rugby, not to mention the glittering slew of high-level odd-jobs he’s done for sporting federations worldwide. ‘But there isn’t a single full-time sports scientist employed by a sport.’ The UK, for instance, has scads of them, even to apparently ‘absurd levels of specialisation’, like the so-called horizontal-jump specialist, a long-jump labcoat who must have, at entry-level, a Ph.D. in Engineering.

‘They invest in the beep-beep,’ he says. And here? ‘In South Africa they either undervalue expertise or have false expectations. For the last seven, eight years it’s been one dead-end brick wall after another, dealing with government and sports federations.’ He adds, ‘I always get into trouble for saying this stuff …’

Charging at walls, pushing towards barriers and fiery limits. This is Tucker territory, the zone he works both as a specialist in high-performance sport and an Ivory Tower tearaway who delights in communicating with the masses, giving omnivorous coverage to sports through newspaper articles, talk-radio spots, corporate speaking, interviews with all from CNN and Sky News to Al Jazeera, and – notably – his blogsite The Science of Sport; begun back in the day for laughs with a university mate, it is now hugely popular and lent oomph by a Twitter account with 37,000-plus followers.

Not content with entering the debate about Caster Semenya, he has been a leading voice of dissent in another matter, it too involving a sports idol and endowed with global incandescence: the question of whether Oscar Pistorius should be allowed to compete against able-bodied runners.

Tucker presented his objections in 2007 in an open letter to the International Association of Athletics Federations (IAAF), arguing that, for a variety of reasons, those famous prosthetics confer an advantage, one he puts at ‘between six and ten seconds’. ‘Almost any engineer or physiologist would know this,’ Tucker says. ‘It was pretty obvious, but no one was saying it.’ Maybe for the sake of a quiet life. There were angry e-mails, how-dare-yous, ‘pressure put on bosses to silence me … lots of emotion’.

After the IAAF banned Pistorius from able-bodied athletics, he appealed against the decision in 2008 and had it revoked. Tucker continues to nurse doubts about the ruling – ‘a complete farce,’ he told Runner’s World in 2011. For his turn, Pistorius told the Mail Online in 2013: ‘There are many ill-informed arguments. There are people who are commenting for personal gain or to make a name for themselves or to be controversial.’

Call Ross Tucker ‘Ross Tucker’ to his face and he’ll smile wryly; call him ‘publicity-hungry’ and it’s ‘almost hurtful, offensive’. It’s not just Pistorius’s ‘most common criticism’ of him, but what he sometimes overhears behind his back among other scientists: ‘Oh, that guy’s just a media junkie looking for fame …’ (What aren’t you getting?)

Met in person, he’s not the over-compensating pencil-neck or excitable, chain-smoking fatso you might idly imagine. ‘Howzeet, howzeet,’ he murmurs to passersby in the corridors upstairs of ESSM. Downstairs is the squash-court hubbub of the gym, laboratories and walkways, festive with students who look almost all-girl. But here it is quiet, with windows offering glimpses of big blue, of Table Mountain. Nor is any violent horseplay is in progress in the office he shares with a coterie of other staff, just head-down, tenure-track efficiency. Horizontal-jump specialists at work.

Tucker goes inside to fetch something. Stubbled and shaven-headed, he’s dressed in track top and chinos, trim and solidly-built, and reminiscent of a coach you might have had in high school, the sort who read books and stuff – composed, tough but fair, comfortable to be around. He steps out again. Did you know, before his semi-retirement Tim Noakes had his office a few doors away?

A fatedness to that, as it’s a name which would loom large in a biography about Tucker: the childhood in Vanderbijlpark, his father a devoted marathon runner; Easter holidays in Cape Town for the Two Oceans; the buzz of athletic solidarity, freebie-gift magazines dense in racing stats (‘I was obsessed’); the chance benefactor at a party who – hearing that Tucker, 12, had started running and saw a future in sports and medicine – suggested he read Noakes’s The Lore of Running.

Which he did, re-reading it ‘every year for five years’ in high school, until the day came to pass when Noakes, inspiration and role-model, was also his doctoral supervisor. Tucker’s Ph.D. thesis would merit a chapter at least in the biography. A turning point, it sent him in flight from academia and, armed with diploma in sports management, he entered the business world for several years, eventually making his way back to the fold.

‘I wanted to be more real-world,’ he says, an approach he suggests is as strong today as it was then. Whereas academic activity is usually an end itself, Tucker’s stance is that sports-science know-how should make a difference to what’s going on out there in the world.

‘We hold such interesting, valued information, yet very few are willing to speak to any other than the scientific community. It seems almost irresponsible to have an opinion on anti-doping, or Oscar, whatever, and not tell people …

‘What people see as my outspokenness is just someone having an opinion in order to add a perspective to a discussion they’re having, an insight they otherwise would not have. It’s to add to an intellectual discourse that already exists …’

‘‘It’s a cliché, but in academia you learn everything about one topic. It gets silo’d off from the rest of the world. It’s like a straw, a narrow column, as high as you want it to be, but it doesn’t go anywhere. I’d rather be like a bucket of water that goes everywhere.’