British busybody Peter Hain slated white South Africans as ‘whingers’, but maybe the Uitlander has a point. ‘Whingeing’ is a social pastime that offers perverse, kinky pleasure … otherwise why do it 24/7 despite its ostensibly irksome subject-matter. 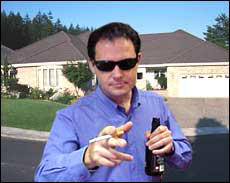 Never one to shy away from having a dig at pale-faced South Africans, Britain's Foreign Minister for Africa Peter Hain recently ingratiated himself even further with the breed by accusing them of being unwilling to invest in the country's future. While making a call more ‘economic patriots’, Hain advised white South Africans to stop selling the country short and count their blessings instead. ‘There is,’ he sniffed, ‘almost a preoccupation with whingeing and complaining.’

Hain's comments open two avenues of enquiry, the one relating to the validity of his claims, the other to the source from which they emanate. Clearly he won't be winning any hearts and minds among the people he stereotypes in this way, but there is something pleasingly nostalgic in having a foreign potentate once again presume to lecture South Africans on how they should behave. The comments recall those heady days of the old regime when the country provided a focal point for the altruistic impulses of countless international activists, aid workers, peace monitors, protestors, boycotters and the like, of whom Hain was himself a figurehead. And for this service to the country he is, of course, to be congratulated.

But in general terms it's worthwhile considering the less-obvious motives that foreign citizens, whether influential or peripheral, have in making pronouncements on local affairs. For many years, and arguably still to this day, South Africa held the appeal of an Arnold Schwarzenegger blockbuster: an epic storyline, clear-cut moral dichotomies, a cast of thousands, and loads of adventure and brutal, non-stop violence, all of which one could participate in from the comparative safety of foreign shores. This is not to deny the effectiveness of the international anti-apartheid movement – economic sanctions and the isolation of South Africa, combined with the strategy of ‘ungovernability’ at home, are often cited as the main reasons for the apartheid state's collapse – but it seems ill-considered to deny that many different kinds of motives, some of them deeply ‘psychological’, underlie political action.

In the case of foreigners talking about South Africa, several possible sources of private gratification are available to speakers in the course of addressing a topic of public concern. For a start, and for example, by aligning oneself with a morally benign and oppressed camp – the black majority, for instance – one not only hopes to achieve a valued affect in the real world, but one can in addition bask in the warm light of approval from one's conscience. One convinces oneself that one is decent and upstanding, and if one happens to be Caucasian as well, this feel-good rush may soothe one's guilt at racist practices that are perhaps prevalent closer to home.

Conversely, this glow of love can be legitimately, as it were, coupled with the rosier glow of anger and contempt that arises when one attends to the morally indefensible category of the White Seff Efrican, whether he or she be the Nazi of old or the unreformed racist, or foot-dragging national saboteur, of the present time: it's okay to vent one's aggressivity on them because they are Bad People and they deserve to be punished. Love and aggression, sex and violence – South Africa lets you live it all, even from afar.

So, for example, if one were to stereotype white South Africans as unpatriotic whingers and reactionary malcontents, one is being patronising, to be sure. But by saying patronising things, one is also casting oneself in a certain way: as a patron, one who is clear-sighted where others are blind, and morally stainless where others are mean, vindictive, selfish, and in need of guidance. In short – it's time to feel good about oneself. Time to walk tall, clean and pure in this barbarous land of grumbling half-wits and moral bankrupts.

The ‘typical’ white South African response to ‘foreign interference’ of this ilk is to retreat into deeply defensive xenophobia. But if Hain's comments raised the ire of a few locals and ruffled feathers here and there, it is perhaps not so much because they were spoken by an outsider to the country as it is that these kinds of comments are a common refrain at home, particularly amongst the ANC, whose spokespeople habitually construe criticism directed at them as proof of white racism. This is the famous ‘race card’ that is so notoriously played in order to negate criticism of the government; that this card was tacitly played by a foreigner simply makes it all the more disagreeable to some. As the Sunday Times columnist David Bullard pointed out, ‘Those of us who are still here are by definition patriotic South Africans and certainly don't need a visiting British politician to lecture us on how to talk about our own country or its politicians. As taxpayers we have every right to complain when our money is frittered on conferences on racism rather than used to put more police on the streets’ (21/01/2001).

Having made these points, it must be said, however, that it is hard to shake the feeling that Hain – and indeed the ANC, who vigorously endorsed his sentiments – have a point. ‘Whingeing’ is more than the act of criticising; it is an habitual social pastime, and, hell, it's a lot of kinky fun, otherwise why do it night and day, year in, year out, even though it ostensibly deals with distressing, unpleasant subject-matter. This practice must be providing a yield of pleasure in some way or another and however perversely. If foreigners can get their jollies by dissing white Seff Efricans, and elements in the ANC can reap the pleasures of martyrdom by constructing themselves as the victims of an organised policy of persecution by the media, etc. (and in the process shift blame from their actions onto the ‘persecutors’ who expose them), then similar dynamics are no doubt at work in the infamous white whinge.

This is not the occasion to outline what a psychoanalysis of the ‘white whinge’ would look like, but a few suggestions are in order. The ‘white whinge’ is a social activity – in the language of transactional psychoanalysis it is a ‘game’ in which players take on different roles and unconsciously collaborate to achieve a reward of pleasure that might seem to contradict the stated or apparent purpose of their conversational exchanges. In other words, they're complaining but at another level they're getting their kicks as well; they're complaining about things in the real world that really exist, but at another level they're also exploiting these things to get some psychological compensation, which is what makes a ‘whinge’ tentatively different from ‘criticism’ and so on.

In its minimal form one needs at least three elements to play ‘white whinge’: two speakers and a third entity to which they make reference. One doesn't need to be a Sigmund Freud to make a shrewd guess as to who, or what, usually tends to take the place of the third entity: ‘the ANC’, ‘the (black) government’ or sometimes even more simply, ‘blacks’. It's likely that in many cases the barely-secret aim of the whinge is the pleasure of vindication: ‘We always said that blacks are no good/that they'd screw up’. But no doubt there are other pleasures to be had: the social competition of seeing who can shock the hell out of the other by coming up with the more hair-raising tale; the satisfactions of solidarity to be enjoyed by ‘speaking among ourselves’; the self-justifications and self-absolution that blaming the government offers (‘I'm a loser because I'm a victim of society’, ‘I drink myself to my knees because ... well, Thabo makes me do it’).

Once again, this is not to minimise the seriousness of much that is complained about but to highlight that in conversation even terrible tragedies may be put to work in the service of subliminal desires and hidden aims. Moreover, the ‘white whinge’ is perhaps but one of many psychological games and formulaic interpersonal exchanges that have emerged or been reworked in democratic South Africa. Still, it is an influential and widespread informal cultural practice, and the list of pleasures mentioned above, admittedly hardly original in its insight, serves only as the crudest sketch of what might emerge were our country to be placed on the psychoanalyst's couch.