Mouths are frothing, eyeballs bulging and embolisms erupting as South Africa reels from its latest assault by the forces of evil: Max Du Preez's remark that President Mbeki is a ‘womaniser’. Once again the news is not in the news: the news is the news.

The President is reclining on a sofa. He is wearing stovepipe denims and a sleeveless string vest; his torso gleams from workouts at gym. Behind him, a trio of Presidential Playmates – ‘glamour models’ – are soaping themselves in a bathtub. One of them rises from the water, lathered in suds, and covers herself in a gown. She slinks up behind the President and begins rubbing his shoulders. A rakish smile plays about his lips, his debonair goatee. He drains a mug of lager, kills a smoke on the sole of his boot. Then he looks into camera and delivers the election slogan: ‘Hey, lasses – votes oot f'r the lads!’ ... or some such. 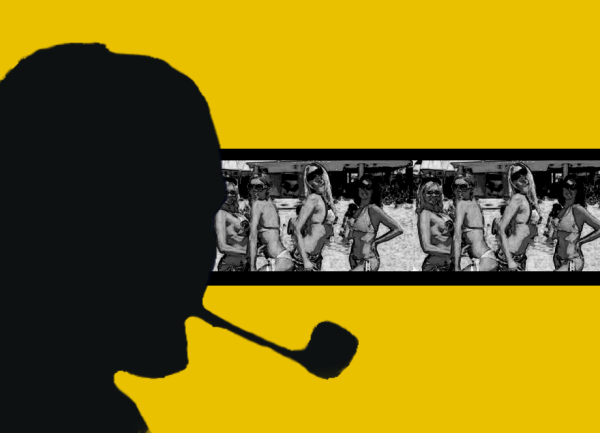 It's a wrap! Applause breaks out, film crew emerge from the woodwork. The President has been remodelled: a morally renewed Renaissance man as ready for a cabinet meeting as for the cover of Loaded. He's been re-styled The Stud President, a laddish leader for the new millennium, a man's man for sexy SA. But no time to fool around: pausing only to whisper in the model's ear and pat her on the behind, he's off to give a Men's Health exclusive on sex tips and perfect abs ...

This, at any rate, was the improbable scenario that came to mind when news broke that journalist Max du Preez had described President Mbeki as a ‘womaniser’ – a scenario in which Mbeki went beyond simple damage control and turned an alleged weakness, or an alleged slur, into an electioneering selling point. Why shy away from the scandal's Clintonesque overtones? Embrace them, run with them, spin them into political capital!

In a notable performance, KwaZulu-Natal ANC spokesperson Dumisane Makhaye went so far as to call Du Preez's claims ‘a declaration of war’. ‘The ANC of KwaZulu-Natal accepts the declaration of war by Max du Preez and his political masters who have unleashed an unprecedented vitriol against the ANC, its leadership, the President and its supporters. The ANC, for a long time, has been a cushion between the anger of our people and the political commissars of apartheid masquerading as journalists ... The fact that President Thabo Mbeki is hated by all racists and their lackeys with a special venom is an indication of how valuable he is to our struggling masses.’

As is well known by now, Mad Max, that notorious apartheid Antichrist, chose to initiate his war against democracy during SAFM's programme The Editors. ‘There is a lively debate inside the ANC ... because [Mbeki] is seen as a womaniser,’ Du Preez said. ‘It is publicly known – and I think we should start talking about this – that the President has this kind of public life. I'm not saying it's scandalous. He's a womaniser.’

Du Preez's comments were made during a discussion about claims made in a letter – leaked to the press – written by Winnie Madikizela-Mandela to Deputy President Zuma. She had denied responsibility for gossiping about Mbeki's alleged affairs.

Du Preez's remarks prompted strong condemnation by the ANC. Its national representative Smuts Ngonyama said, ‘Max du Preez and his “old friends” have clearly embarked on a war path and such statements on the ANC are a declaration of war.’

In turn, Du Preez accused the ANC of a ‘hysterical overreaction’. ‘The issue ... is the hot topic of gossip in black high society, [among] the political elite, journalists know about it, his whole security establishment knows and talks about it and is concerned about it,’ the Mail Guardian reports Du Preez as saying. ‘I think the ANC's reaction to [the comments] shows that it's a much a bigger problem than I thought it was.’

A good example of this ‘overreaction’ would be the call made ANC Western Cape provincial secretary Mcebisi Skwatsha for special legislation to outlaw insults the President. Skwatsha said that although South Africa had entrenched the right to freedom of expression, ‘no one has the right to insult the head of state with impunity ... For anyone to be able to state as fact that the President is a womaniser and get away with it, is unacceptable.’ Bill Clinton would have nodded in sage agreement.

Patricia de Lille of the PAC dismissed Skwatsha's appeal as ridiculous, saying that the President already had recourse to the common law if he felt aggrieved. ‘There cannot be special provision for special people. We are all equal under the Constitution,’ De Lille said. ‘[The ANC] insults opposition leaders on a daily basis. We are called racist and unpatriotic and all sorts of names.’

For its turn, the Cape Town press club said, ‘Calling for a special law to cocoon the President from free speech ... is symptomatic of the free-floating paranoia that characterised the apartheid government, not a democratically-elected one.’

So once again, not for the first time and certainly not the last, the news is not in the news: the news is the news. Admittedly the Max du Preez ‘womanising’ saga – as perhaps, years on, we will faintly remember this apocalyptic attack on the state – has a few novel twists. I particularly enjoyed the creeping banana republicanism of the proposed ban on bad-mouthing the President, a measure that would be sure to leave droves of comedians, let alone scum-sucking journalists, out of work or rotting on the pillory. It was also interesting to learn that the President allegedly has a sex life, allegedly adulterous, and so what, big deal, bully for him, whether true or not. There is, it seems, an extreme limit to the exercise of freedom of speech, a fiery wall beyond which no one may venture, and that limit is the point at which the state's ruler's private life begins: more specifically, it is his family, his marriage, indeed, his intimate body.

But the privacy of the presidential body is apparently not the private body of an ordinary bourgeois citizen. It is the body and person of a special being, the supreme office-holder, enveloped in the numinous authority bestowed on it by the people. Strike at this body, the reasoning goes, and you strike at the people. You cheapen it, take it into the gutter, and along with it the people, for whom the President serves as a symbol of collective aspiration. There are shades here of Versailles and Louis XVI, of monarchs who may not be looked on directly, glimpsed in states of human vulnerability, or otherwise apprehended in their bodiliness and thereby reduced in status – and, no doubt, it's the desire to violate this residual taboo that so drives the British tabloids in their hunger for a peek at Fergie's knickers, and the like.

However, it's hard to impute a prurient or iconoclastic motive to Du Preez – as he himself said at the time of making, or at least passing on, his allegations, ‘I'm not saying it's scandalous.’ And writing in his weekly column, he went on to give evidence of the secular rationality of his concerns, which others have held up as blasphemy, as sacrilege. Why, he asked, should South Africans not know about something ‘as important as a potential weakness of their head of state while most of the political and security operators know about it’? Do we ‘really want to be like the former Zaire, where everybody knew about Mobutu sese Seko's shenanigans, but it never appeared in a newspaper?’

He was, Du Preez said, hardly saying anything that had not been said in public before.

And so the old, old media-bashing story lumbered into action, and beneath its sound and fury, the tedium of familiar set-moves slotting mechanically into gear. The interrogations of media politics, ownership and control, the calls for curtailment of free speech, the ad hominem attributions of racism, the same refrains: blame the messenger. And if the ANC is far from deluded in detecting anti-ANC, even racist, animus in the media at large, it is surely in danger of making a reflexive habit of stereotyping each and every critical discussion as an unpatriotic attack, as a form of treason.

Du Preez's allegations apparently went even further than being an act of violence. They were, as Dumisane Makhaye said so memorably, ‘a declaration of war’, instantly turning Du Preez into a part standing for a larger whole – some shadowy, monolithic antagonist – and a handy scapegoat to exemplify all the evil in the world. Politics, like warfare, needs an enemy, one that isn't dispersed and impalpable but that you can see in front of you and lay your hands on.

It's this polarising logic of us-them that will perhaps prove more effective than any special law in silencing debate, an ideological pressure that reduces everything to the same old South African story: me white, you black; me black, you white.