The Joy of Vandalism

The Western as well as Islamic world condemned the Taliban's destruction of two Buddhist icons. Of course they would – they just don’t get it. What people overlook is that religious extremism has its uses. It passes the time and it's a helluva lot of fun. 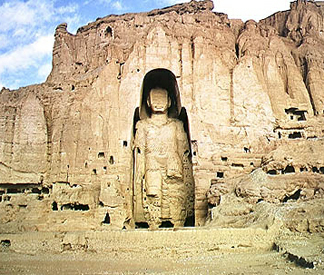 To look at me you'd probably never say it, but underneath my austere and sober exterior I'm just a down-home, salt-of-the-earth, fun-loving, smash-it-up kind of guy. Nothing gives me more innocent pleasure than breaking loose with a few friends, discussing the poetry of T.S. Eliot over dinner and port, and then hitting the streets for a bout of all-night, hit-and-run vandalism. Why, just this morning I found myself alone in the office car park for five minutes: just me, a R2-coin, a monkey wrench, and my colleagues' cars.

After laying into the boss's Batmobile, I turned my attention to the Mopeds, go-carts and shopping trolleys of those further down the food chain. Wow, come home-time today everyone's leaving on foot. Oh, sure, there'll be a few outraged chuckles, a few exasperated sighs, but everyone will see the lighter side. Eventually. All good, clean fun.

So, hell, yes, I don't like vandalism – I love it. I've pushed the limits of my daring and creativity a few times, but I'm not afraid to admit when I've met my match. Yep, I tell you: those Taliban dudes, those funky fundamentalists who call the shots in Afghanistan ... now those are cats who know vandalism. They begin where I leave off, panting; they dream the impossible dream. These are party monsters who can really rock 'n roll!

The Taliban have completed the centre-piece of their most recent adventure in social transformation: the destruction of two colossal Buddhist statues in the central Afghan province of Bamiyan, all this being part of a broader project ordered by Taliban leader Mullah Mohammed Omar a couple of weeks ago, namely the erasure of the country's pre-Islamic heritage.

Following the best tradition, the one-eyed leader said his decision was based on orders from God. He explained that the two giant statues of Buddha, carved into sandstone cliffs over 1,500 years ago when Afghanistan was a seat of Buddhism, were ‘false idols’ and thus needed to be taken out with the aid of dynamite, tanks and rocket launchers. Anyway, he has reportedly said, ‘all we are breaking are stones’.

I love that bit – all we're breaking are stones – which I fondly imagine said with a shrug of the shoulders and a shy little mischievous smile, as if to say, Now how the hey can you guys stay mad at a kidder like me? It takes a great guy, a great vandal, and a great rock 'n roller to look at two ancient and imposing statues, the one 38 and the other 58 metres high, two statues that survived an attack by Genghis Khan in the thirteenth century, statues that are visited by pilgrims from across Central Asia and tended by priests who live in nearby caves, it takes (as I say) a great man not to feel overpowered by a sense of reverence, to resist being humbled by the awesome passage of time and by these phallically monumental testaments to an ancient and common human aspiration to the divine. It takes a great man to be able to say, ‘Screw it! This old crap is history! Bring on the dynamite, man, and let's rock 'n roll!’

Obviously there will be wet blankets who don't share the Taliban's sense of fun, and predictably the international community has reacted in outrage, having recently initiated a flurry of diplomatic activity in a bid to stop the party before it could get out of hand – presumably with a view to saving the statues for the day when they could be adorned with the golden arches of a famous hamburger chain. Descrying the demolition job as a ‘crime against culture’, UNESCO said, ‘It is abominable to witness the cold and calculated destruction of cultural properties which were the heritage of the Afghan people and, indeed, of the whole of humanity.’ I mean, come on, f'r crying out loud, you pantywaists!

The Islamic world in particular took a very dim view of these antics, and barely hours after the first unconfirmed reports that the statues had been trashed, a high-level delegation of the Organisation of the Islamic Conference (OIC) was still holding talks with the Taliban. Amongst the delegation, which included two leading Sunni clerics (the same faith as the Taliban), was no less an eminence than Egypt's top religious leader, Mufti Sheikh Nasr Farid Wassel. He told reporters that ‘from a religious viewpoint it is clear, these statues are part of humanity's heritage and do not affect Islam at all’.

And earlier Iran denounced the Taliban's planned destruction of the Buddhas as giving the world ‘an inappropriate image of Islam’. An official for the Iranian foreign ministry called on the Taliban to ‘respect the values of people from all religions’.

Now am I the only one who doesn't get what all the fuss is about? Is it just the Taliban and I who are in sync to the entrancing allure of in-yer-face vandalism? I mean, let's look at this rationally. In the first place the Taliban are aspiring to create theocratic society, a society premised on the convergence of religion and politics, and all this destruction of a previous politico-religious order is an action of state, an affirmation of sovereignty that is keeping with what all new, fledgling states usually do: reinscribe their political geography, revise the iconography of power. In other words, it's out with the old and in with the new.

Okay, here in South Africa not much happened. A few street names were changed, the provinces were re-mapped and re-named, but the Voortrekker Monument is still standing, as are those dinky statues of Jan Van Riebeeck on Cape Town Foreshore. On the other hand, come independence the former Soviet Union's satellite states enjoyed a more extensive and symbolically potent face-lift, particularly when the statues of Lenin were toppled – and who shed any tears when the Berlin Wall went down? Maybe the general vibe surrounding its demise would've been different if the thing had stayed up for a thousand years. Then smashing it to smithereens might also have been called ‘a crime against culture’, not so?

And as for the concerns of Iran and others that the Taliban's actions create ‘an inappropriate image of Islam’, I think their anxieties are misplaced. Let's face it, what's at issue here is not one particular religion but religious extremism, a virulent outgrowth that can, and has, affected virtually all the religions of the world, whether we're talking about a David Koresh who decides that it would be cool if he induced his followers to have sex with him, or the mid-west Bible-Belter who takes that first symbolic step to the annihilation of the Other by signing a petition to outlaw Huckleberry Finn at schools ... or the Inquisition! Oh, man, don't get me started on the Inquisition. Now those were the glory days of vandalism in the name of a religious cause, provided you played your cards right. All that torture, that kinky stuff with slatternly witches confessing and tearing off their clothes, the quaking dread that settled on the peasantry as you and your honchos, trying hard to keep a straight face, cruised into town to shake things up ... Wow, talk about living life large.

Religious extremism, closely affiliated to its buddy, political extremism, can happen anywhere, anytime, and it's got some bad press over the years. What a lot of people don't realise is that religious extremism has its uses. It passes the time and it's a helluva lot of fun. Can you imagine what a laff-fest it must have been in Bamiyan when the explosions went off and everyone started rocking and rolling, especially the statues? The thought of all those international big-wigs falling about and spluttering in dismay must have simply made it a bigger gas. I mean, where's the percentage in trashing stuff no one gives two hoots about anyway? You could have your jollies and – this is crucial – simultaneously feel that you're doing the right thing, that you're insulated from consequences. After all, aren't your actions driven by what you interpret the divine will to be?

That's the deal with the psychology of religious extremism: you can have loads of outrageous fun – with a clear conscience! The more extreme the religiosity, the more stringent the oppositions in your head between right and wrong, ‘good’ and ‘evil’, the saved and the damned, the chosen and the fallen, the godly and the barbarian. We're talking about rigidly us-them ways of thinking, but there are none of the win-win solutions here that supposedly produce highly effective people. Nope, this is a style of thinking that goes for win-lose solutions. The more intensely you believe yourself and your chums to be on a mission in a world where only you are right and everyone else is wrong, the more licence you have to unleash a theoretically limitless violence on those who aren't in your group. You can vandalise the cultural artefacts they've projected around themselves, you can strike their proxies, the outward traces of their being – hey, you can even vandalise their bodies and their lives! In short, you can get up to all the stunts you wouldn't be able to do if you were otherwise cooped up in an office.

And at the end of the day, when the dust has settled around the rubble and you're high-fiving it with your connections, when you've erased the barbarian signifier, you can look around and say: ‘Now who's the biggest rock 'n rolling bad-ass in town? I am, man, I am! I'm the barbarian.’ You can look around in self-congratulation and quote the words of Ozymandias, whose ruined statue litters a famous poem: ‘Look on my works, ye Mighty, and despair.’

P.S. In case there are any impressionable five-year-olds who have read this far, let me say that this essay is satirical and ironic in tone. I did not actually vandalise the office car park. I disagree with the destruction of ancient religious and cultural artefacts. I support diplomatic initiatives by political bodies and religious communities to prevent further acts of destruction by the Taliban. I realise there is a difference between the Berlin Wall and the Bamiyan statues. I support religious and philosophical tolerance. My argument about religious and political extremism is based on the Freudian theory of libidinal investment in superegoic functions. And I cribbed some factual stuff from AFP.