An email interview with Tony Leon, leader of the official opposition party, the Democratic Alliance (DA). Random quote: ‘I do not collect much. In fact, I am the opposite – I am great at throwing out and destroying redundant paper.’ 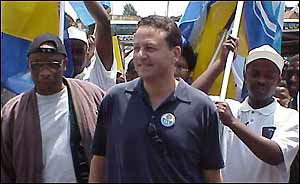 WORLD ONLINE: Tony, you're the leader of the official opposition in Parliament and one of the most famous politicians in the country. But what are your less-well-known claims to fame, particularly amongst your friends and family? Are you renowned as someone who could start a fight in an empty room – or are you better known in private as a shy, limelight-wary feller who has to be pressed for his opinions? Do you play an esoteric sport, score well in computer game shoot-'em-ups, or do you collect stuff – beer coasters, tattoos, editions of The Communist Manifesto, etc.? Tell all, no matter how disquieting.

TONY LEON: My private life is rather boring and lacks exotica. I love being with my family. I am mesmerised by my two miniature dachshunds and I love to walk in Newlands forest. I also enjoy braaing, travelling to exotic destinations, eating curry and drinking good red wine. I do not collect much. In fact, I am the opposite – I am great at throwing out and destroying redundant paper. I collect matchbox books and Manchester United football team memorabilia for my stepson.

WORLD ONLINE: You're a rare breed: a lucid and articulate politician who can think on his feet. Where did you get this gift of the gab?

TONY LEON: I think a combination of my father and my mother. My father having been a judge and my mother being the most quick-witted person I know. I also had a couple of years under the guidance of Kearsney College Debating Society and schoolboy parliament. That helped.

WORLD ONLINE: We've had Pik, Terror, Khoisan X and, most illustriously, Kortbroek. What's your own political nickname in Parliament's highways and byways?

TONY LEON: I do not know a nickname to my face. There are no doubt a couple of disparaging ones behind my back. The only nickname I ever had was ‘judge’ at school but ‘Tony’ is actually an abbreviation for Anthony James and I suppose that could be a nickname.

WORLD ONLINE: What do you think you might have been doing if you hadn't entered politics, or, earlier, followed a career in law? That is to say, what have been some of the other career options you've entertained in your formative years – or have politics always been a calling for you?

TONY LEON: Since the age of ten I really thought that I wanted to go to parliament. I do not know why, maybe some inner calling. But when I arrived here at the age of 32 back in 1989, it was a little like the dog that runs after the bus every day and eventually catches it. What do you then do? I suppose in an ideal life I would like to be a writer.

WORLD ONLINE: There is, of course, a double-edge to my question about alternative careers, given the recent NNP defection from the DA and the political realignments that are currently taking place. How worried are you about your party's future? Does the NNP, thanks to its partnership with the ANC, now threaten to eclipse the DA?

TONY LEON: The NNP standing in the Western Cape, according to the latest Lawrie Schlemmer poll, is about 2%. The DA/DP is at about 40%. So, I do not think the New National Party deal is going to impress anyone except a few Nat apparatchiks who get Mercedes Benz's out of it. Anything is possible in politics or life, but if Mr de Klerk walked out of the Government of National Unity because he said it was [like] being on a ‘political death row’, it seems improbable that Mr van Schalkwyk will turn it into a crowning success. The Nats have sold out their voters and they have changed their principles for the umpteenth time. I once said they had been on more roads to Damascus than the average Syrian truck driver. They seem to be on the same road.

WORLD ONLINE: Having loved and left the DA, the NNP favoured your party with some glowing tributes as it headed on out the door into the arms of its new paramour. Most memorable of these was that the DA is the ‘angry white voice’ of South Africa. How much justice is there to this characterisation?

TONY LEON: Mr van Schalkwyk says many things. He once called Nelson Mandela ‘an embarrassment to South Africa’. He called for the resignation of Steve Tshwete whom he embraced last week and he described the ANC a couple of months ago, as ‘hooligans’. So, if the same mouth is now calling the DA an ‘angry white voice’ I simply take it from whence it comes. Not just whites, but especially blacks, do have a lot to be angry about in South Africa: crime, AIDS, unemployment, corruption. There are also many reasons to be positive about South Africa but you do not need to embrace the ANC in order to be a patriot.

WORLD ONLINE: The ANC and NNP are representing their partnership as a watershed development in national reconciliation, and they are invoking a shared history and a shared vision of a common future to lend profundity to the moment. Is all of this just a load of crap – or is the arrangement, whatever its more immediate or expedient motives, answering a genuine need amongst white and/or Afrikaner voters to feel that they're crossing boundaries between themselves and the black majority?

TONY LEON: If the ANC were serious about reconciling with South Africa's minorities, they would then be talking to the party that represents those minorities and that is the DA, not the NNP. That is not what I determine, that is the judgement of the voters. The truth of the matter is that the NNP is going to be gobbled up by the ANC and that the ANC cannot stand the idea of any independent opposition force that is outside its control. The DA is proudly South African, proudly independent and proudly outside the control of the ANC.

WORLD ONLINE: Peter Marais openly defied your orders that he stand down as mayor. When he was expelled from the DA, he took the matter to court – successfully. It seems he wanted pretty badly to climb out of that mayoral limo on his own terms. And now, at the time of writing, he appears set to become the Western Cape premier. Some have said you were comprehensively out-manoeuvred by him. Your reaction?

TONY LEON: I do not have a single regret about my judgement that Peter Marais' mayoralty was causing great damage to the City of Cape Town and to the party. The court found against us on procedural grounds, as was their good right. Peter Marais previously described the ANC as ‘godless ministers’. Marais in turn was described by Ebrahim Rasool of the ANC as a ‘Bible-thumping liar’. So they are welcome to each other. But the Western Cape has voted consistently against the ANC and we will give the Western Cape their province back when the people go to the polls in two years' time.

WORLD ONLINE: And the personal vibe between you and Marthinus van Schalkwyk – will you be sending each other birthday cards ... or is it all overturned tables, smashed bottles, and being kept apart by parliamentary security whenever the two of you share the same air-space?

TONY LEON: Marthinus van Schalkwyk has been dishonest and disingenuous. He has basically tried to wreck every institution that once belonged to him. He took the previous NNP in parliament from 87 seats to 27; he attempted to take over the DA by subterfuge. He is not answerable to me, but to his voters whom he has previously let down. My attitude towards him is actually irrelevant; it is really a matter for him and his conscience and his commitment to the people who elected him. That is why I suggested we have an election in the Western Cape. That is why he was challenged but refused to hold a congress of his own party.

WORLD ONLINE: Let's shift focus from the mire of the local to the mire of the global. The US-led coalition is fighting a war against Al Qaeda and their sponsors. It's a war in which the US has the military advantage – but what will win the peace?

TONY LEON: I agree completely that terror and terrorism and the oxygen off which terrorists live needs to be destroyed. Al Qaeda is an enemy of freedom-loving people. We have temporised with terror for far too long. Over time, it is only a massive improvement in the conditions in which the majority of poor people live across the world, which will remove the breeding ground of terror. That is a long-term project fraught with difficulty and even improbability but we should not be deterred from doing it. Many people across the world live not just in conditions of backwardness and poverty, but in profound conditions of oppression and degradation. This will require the resources of the world and essentially the Western nations to turn around. But what we cannot do is allow terrorists to determine changes to foreign policy, or even to national policy. If we do that then we will simply encourage them to continue their murderous ways and to bomb a few more buildings in world capitals and kill a couple of thousand more people. I think you have to be two-fisted. You have got to smash terror networks wherever they exist in the world – and you have got to use the other hand or fist to start radically improving living conditions on the ground.

WORLD ONLINE: Changing focus again, what do you find to be the best rewards of political life and what the worst day-to-day downers?

TONY LEON: The best rewards of political life are meeting new people, seeing my own country from the inside out and knowing that even a small intervention can often lead to a major change and improvement in a community's wellbeing. The worst aspects are dealing with dishonest people and putting up with the back stabbing and the insincerity that is often unfortunately the flip side of a political life.

WORLD ONLINE: How do you relax and unwind from the daily political round – 10km sprints, or flopping on the couch with a cold one and the latest Noam Chomsky/Francis Fukuyama/David Grisham?

TONY LEON: Working out with a personal trainer (dare I admit it!). Having a whiskey with my wife who drinks wine and reading the New York Review of Books.

WORLD ONLINE: Who are the thinkers, mentors and role models who've been most influential in your life?

WORLD ONLINE: One gets the impression that politicians are at one another's throats day in and day out. But are there any MPs of other parties, particularly the ANC, with whom you're on friendly terms or whom you'd even go so far as to call a personal buddy?

TONY LEON: I am not going to name names because that might be career-limiting for them. But my wedding, however, was an ecumenical event in the sense that I had friends from all parties present at it.

WORLD ONLINE: A last question, Tony: What do you consider to be greatest misconceptions – whether good or bad – that the public has about you, and I mean personally more so than politically?

TONY LEON: That I am arrogant.