Ten Reasons Why Mugabe's Critics Should Belt Up

You're a meddling foreigner. You're an outsider to the cause. You didn't fight in the war. You're a racist bastard. You've been duped by the Western media (you twit). You're a British imperialist. You're a terrorist. You're a pawn of the Antichrist … 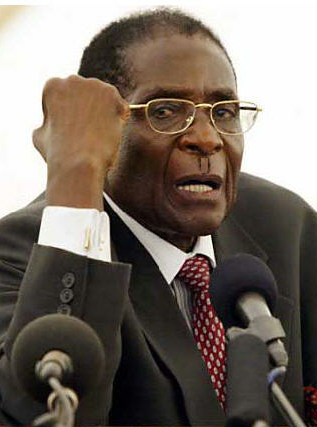 With elections looming [in 2002], nothing can stop the international campaign of vilification against Zimbabwe’s President Robert Mugabe. But the critics should listen to reason – and then just belt up or bugger off.

1. You're a foreigner. Zimbabwe is a sovereign state that fought white minority rule and colonial oppression to get its independence. If it wants to crank up the stereo, drink beer and cause a ruckus on its turf, that's its own business: it's independent. Even neighbours like South Africa should think twice before getting into a tizz about the screams next door, drops in property values, and so on.

Zimbabwe will sort out its problems on its own, in its own very special way; nothing ticks off a sovereign state more than outside meddling, especially when it wants to be left alone to do a whole bunch of no good in the privacy of its pad. Zimbabwean officials and SADC spokespeople both agree: foreigners have no right to interfere. This is the kind of thing Ian Smith and PW Botha used to say in defence of their regimes as well. And why screw with such a time-honoured formula? Some colonial legacies obviously aren't all bad.

2. You're an outsider to the cause. Criticism by foreigners is illegitimate; so is criticism by those who slot into several other ‘outsider’ categories, even if they happen to live inside Zimbabwe's borders. Are you a journalist or an MDC voter? Belt up. That your farm? Bugger off.

More than a sovereign state, Zimbabwe is really an island unto itself, as Mugabe suggests when his speeches take a pastoral turn. It's a self-contained patch of paradise, Eden under a bell jar. However much it might have been ruined by the serpent of colonialism, the alien invader, the day is nigh when it will be restored to its former rustic splendour. This is the milk-and-honey vision for Zimbabwe that Mugabe puts about, and anyone falling outside its ambit, e.g. a white commercial farm owner, an MDC supporter, is a de facto foreigner to the state. (For the status of such people's views, see Point 1.)

3. You didn't fight in the war. The reasoning in Point 2 also applies to Morgan Tsvangirai, the leader of the MDC and presidential rival to Mugabe. Zimbabwe's generals say they will only recognise a president-elect who fought in the war of liberation two decades ago. Tsvangirai hasn't paid his ounce of flesh. Thus, he can't be seen as a full member of the nation, one entitled to occupy the highest office. ZANU-PF teenagers who weren't in the war can be war veterans, but a non-ZANU-PF candidate who wasn't in the war can't be president. Does this make sense to you? If it doesn't, see Point 4.

4. You're a racist. If you're black and critical you're no less of an anti-black racist. Clearly, your white bosses have taught you well. Remember, if you're not for the Zimbabwean government, you must be against Zimbabwe in its entirety. And if you're against Zimbabwe you're an outsider; then, whether or not you actually live in Zimbabwe, you're a foreigner, virtually or literally. Foreigners have no right to interfere. But yet they do. Why? The answer is simple: they're racists. And for racists the very idea that an independent black state exists somewhere out there in the wide world, a state daring to follow its vision, its dream, is an abomination that has to be undermined and ultimately smashed off the face of the earth.

5. Worse than a racist, you're a racist bastard, insensitive to the suffering of millions of landless Zimbabweans. The land reform programme, and the so-called ‘state-sponsored violence’ attendant on it, is a justified response to the legacy of racial imbalances left by colonial rule. A tiny minority of white settlers owns most of the country's commercial farmland. In other words, the problems blamed on Mugabe were caused by British imperialists, who didn't think twice about using violence to seize land. You can't have it both ways. You can't be the do-gooding liberal and agree in one breath with the ideal of equitable land redistribution and yet, in the next, disagree with the methods used to actualise it. If you do, you must be in favour, deep down, with the status quo. You must be in favour of allowing the masses to continue suffering. Feeling pretty lousy now, aren't you? The fact that land reforms have pitched the economy down the cosmic long-drop, and thereby intensified the suffering of the masses instead, simply proves a point: the forces of neo-imperial reaction are as strong as ever.

6. You've been duped by the media, you twit. According to Lilian Patel, Malawi's Foreign Minister, SADC leaders have ‘expressed their concern at the distorted and negative perceptions of Zimbabwe projected by the international and regional media’. And as Zimbabwean Foreign Minister Stan Mudenge pointed out, Britain has been using ‘its considerable holdings and/or control of the media in southern African and the UK to black out truthful information about the significant, positive strides made by Zimbabwe.’ This is why Zimbabwe has introduced an array of restrictions on foreign correspondents and independent local media: to ensure fair, responsible journalism.

7. You're a British imperialist. Britain, Mudenge went on to say, ‘has used its membership of the EU to gain sympathy for white farmers and to try to evade its colonial responsibilities.’ Needless to say, evading its own responsibilities is something the Zimbabwean government never does. Which is why Mudenge correctly argued that the EU's anxieties ‘stem directly from the actions and inactions of the United Kingdom’. Thanks to its media arsenal and pull in the EU, Britain has made a big stink about human rights abuses, etc., but this is just a smokescreen for advancing its economic interests in Zimbabwe. (Oddly enough, this is more or less what Mugabe's critics allege about him: that land reforms are a smokescreen obscuring his true aim, the entrenchment of his power and the lining of alleged overseas bank accounts.) Britain's greed knows no end, and its major political parties, Mudenge said, are ‘sponsoring and funding’ the MDC. For Mudenge, their objective is clear: ‘It is a recolonisation of Zimbabwe.’

8. You're a terrorist. Speaking at the funeral of Cain Nkala, a murdered ruling party militant, Mugabe said the killing ‘was the brutal outcome of a much wider terrorist plot by internal and external terrorist forces with plenty of funding from some commercial farmers and organizations like the Westminster Foundation, which we have established beyond doubt gets its dirty money from dirty tricks, from the British Labour Party, the Conservative Party and Liberal Party and also of course from the government of Tony Blair.’

9. You're a pawn of the Antichrist. ‘God is on our side,’ Mugabe told a meeting of 5,000 Christians in Harare. ‘God gave each one of us land and wealth. He gave us Zimbabwe and no aliens should come and dislodge what is rightfully ours.’ (See also Points 1 2.) To oppose Mugabe's government is to oppose the will of God and thus make of yourself an agent of Satan. Witness, for instance, the heresies of that noted unbeliever, Desmond Tutu. ‘It is a great sadness, what has happened to President Mugabe,’ the former archbishop remarked. ‘Mugabe seems to have gone bonkers in a big way.’

10. Mugabe is a man of his word. If he promises elections will be free and fair, who are you to doubt him? His assurances are good enough for SADC, and should be good enough for you too. Damn you. Okay, so he's reneged on his pledges before, repeatedly, but is this is any reason to be sceptical? Cut him some slack, for Christ's sake. As Prega Ramsamy, SADC executive secretary, said, ‘President Robert Mugabe has made pledges and has to be given a chance to fulfil them.’

Isn't this showing the spirit that regional solidarity is all about? It sure cheered Mugabe up, to be shown such empathy by his SADC chums, such warm backslapping. ‘We are very happy,’ Mugabe enthused as he left a recent SADC jamboree. ‘All issues were well discussed. All's well that ends well.’ Of that we shall have to wait and see.