Talking Garbage on the Trail of Trash

On average everyone in the Cape Metropole produces 1kg of waste a day, and today I’m reporting live from the driver’s cabin of a Cape Town City Council rubbish truck as I lift the lid on an age-old question: Where does all that muck go? 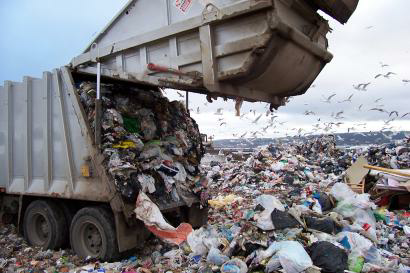 The gardener on the ladder stands frozen in open-mouthed puzzlement as I pass him. His hedge clippers have stopped clacking, and he gives me a look of frank scrutiny, as if I have three heads. Further along, a walrus-bearded pensioner walking his dog in upmarket Tamboerskloof does a double-take while I lumber past. Even the dog flicks its ears quizzically at me. These stares are the price one pays for gutter journalism of the most literal kind. It’s estimated that on average everyone in the Cape Metropole produces 1kg of waste a day, and this morning I’m reporting live from the driver’s cabin of a Cape Town City Council rubbish truck as I lift the lid on an age-old question: Where does all that muck go?

You might have forgotten those unmentionables you turfed out last month but they’re out there somewhere, offering an intriguing commentary on your private life – and conceivably doing so for several decades.

Garbage tells a story, and while following the trash trail through the phases of collection, transfer and disposal, I’ve been attracting weird looks. Passers-by peer at me as if I were a linoleum roll or human trophy that the refuse collectors had salvaged from a bin full of carrot shavings and wine bottles. But the driver, Leonard Daniels, assures me it has more to do with the politics of race and class than any peculiarity of mine.

‘These people are surprised to see you in here because they think a white larney’s joined the refuse beat,’ he chuckles.

That day’s coming, I reply, and by the looks of it I won’t be the only larney donning the trademark orange jacket and brown trousers. Leonard is steering roughly R700,000’s worth of customised machinery up and down the mountain roads of Tamboerskloof. ‘It’s nerve-wracking,’ he says. One of the crew pounds up some stairs towards a cliff-top mansion and returns, revealingly, with rubbish inside budget-supermarket bags rather in Gucci gift-wrap.

Amidst the opulent Victorian and art deco facades, it’s a tell-tale sign of hard times and cost-cutting measures. Leonard agrees that refuse speaks volumes about residents’ secret lives. Although middle class suburbia is in many ways ignorant of the class experience of the proletarians cleaning up after them, these ‘dustmen’ know a lot about suburbia. For instance, they know which residents usually leave refuse in their grounds and which leave it on the pavement. They also know, come Monday collection, which homes will offer greater evidence of an alcoholic weekend than others.

The truck’s proceeding with the traditional commotion of shouts and whistles to the driver. Dogs are barking, and while a voortrapper runs ahead to gather bags into convenient piles, the other crew members heave jinking sacks into the truck’s maw. It’s tough going. ‘I don’t need gym,’ says Kevin Hartzenberg, soaking in perspiration.

He’s been in the refuse game for a decade, but he can’t compete with the 26 years’ service of his elder brother, Tony, whose face was scarred by a work-related accident and who complains of arthritis from years of holding onto the steel bar at the back of the truck. He’s discovered dead babies and been attacked by rats; he’s also collected discarded ornaments and, thanks to his ‘public-friendly philosophy’, enjoyed the patronage of residents.

‘Over time you get to know the people,’ Tony says, ‘but nowadays it’s different. They don’t stay long. They get broken into and move on.’

Refuse collectors operate in crews of four, and although Tony left his younger brother’s group a few years ago when he was made foreman of the CBD street sweepers at the Grand Parade, he refers to his former crew with regimental pride: soldiers come and go, but the unit endures. ‘They don’t want outsiders working with them, even if these other guys’ve been around for 25 years.’

It’s a question of mutual trust, Tony explains: among themselves and with the public. Public trust translates into ‘Christmas box’ donations, and trust within the crew safeguards the ‘little extras’ from collegial theft. ‘You get bottles, papers … Those little extras help you feed your family.’

If Tony speaks with regimental esprit de corps, it’s a feeling shared by another man whose been in the business just as long – Eddy Abrahams, the district manager in charge of keeping the city bowl clean. Refuse collection is clearly more than a matter of lugging trash into a truck, and Eddy heads up two extensive day and night operations. In addition to managing a fleet of compactors, bin-lifters and open vehicles, he also controls street sweeping services.

On average, he says, every CBD street is swept twice daily; Adderley Street is the front line, however, and gets swept 20 times. The resultant haul amounts to 20,900 litres of refuse daily – or 87 bin loads. Eddy admits he’s ‘in the spotlight’, but adds: ‘What gives me satisfaction is walking down the road and it’s shining – the litter bins are clean, and guys are on the job.’

Rubbish collections are a municipal function; bulk disposal of waste, on the other hand, is entrusted the Cape Metropolitan Council (CMC), and once Eddy’s vehicles are full, their next stop on the domestic trash trail is a transfer station. (Industrial waste and items like tyres, planks, mattresses, and so on are taken directly to a landfill site.) There’s a small installation in Simonstown, but the Athlone plant – adjacent to the cooling towers on the N2 – is the largest in South Africa and processes 600 tons of waste a day.

Mike Greenhalgh, an area manager in the CMC Waste Management Department, explains that the transfer station allows municipalities to cut costs and save time. Instead of having vehicles undergo the wear and tear of long-haul trips to landfills, their payloads are discharged at an intermediate site, letting them return to the collection beat as soon as possible. The waste is compacted into 1,5-ton bales, then forklifted onto railway trucks. Every night 400 of these bales travel the 30 km to Vissershok landfill site.

Mike takes me around the plant – a complex of girders, machines and corrugated iron. ‘Large enough for a barn dance,’ he quips in the roaring noise. We’re wearing hardhats because builders are enclosing the delivery area, a concrete expanse across which trash trucks and bulldozers come and go. Outside the air’s thick with seagulls settling on bales of oozing filth. Truly romantic.

Fly-breeding’s a big problem, Mike says – and, of course, odours. It goes without saying that the place doesn’t exactly smell like Chanel No. 5. A sweet, succulent stench pervades the air and stays with one for days like a tequila hangover. We approach the bunkers into which rubbish is tipped. They’re gigantic, blackened vaults. Down there it resembles a student digs. Overhead a gantry crane slides back and forth while a clamshell bucket, something like a monster Venus flytrap, dips down hungrily to lift the waste onto a conveyor belt.

Mike laughs: ‘We regularly get calls from people who’ve lost wallets, rings, you name it. There’s very little we can do – anyone who’s willing to sort through a thousand tons of waste must be pretty desperate!’

The last stop on the trash trail is the CMC’s major waste disposal facility at Vissershok off the N7. It used to be a farm, but for nearly two decades it’s been a graveyard for the city’s sins, an archive of its discarded memories. ‘Everything tells a story,’ says the manager, Gerard September, as we ride through the drizzle up muddy embankments onto a plateau lined with tyre-tracks. Up ahead, men in oilskins scrabble through tip-loads of garbage – they’re part of a controlled salvaging operation. Thousands of seagulls drift overhead; underneath, the topsoil has a spongy solidity.

In fact, we’re sitting on about 30m of hazardous waste. Cool, I think: What a scoop! Gerard disillusions me. ‘Hazardous’ doesn’t mean ‘toxic’. It means uncompacted waste, anything from sludge and asbestos to carcasses.

Another illusion also dies: I’d imagined that a landfill would be a big hole, when actually it’s an artificial plateau. Gerard drives to the bale-fill sector to show me how landfills are made. It’s like using building blocks, he explains. Sure enough, there are the bales from Athlone transfer station, ranked side by side. Every day the new bales are buried in soil, until these blocks cover the entire area and provide a foundation for the next level.

The original foundation, though, is formed by excavating topsoil until clay level is reached. Since waste emits gas and a putrescent run-off known as leachate, the clay’s treated to prevent leachate seeping into underground water. A drainage system bleeds this potent cocktail mixer into various ponds, after which it’s recirculated in the landfill.

Presently the CMC’s also examining methods of leachate purification, in addition to developing various strategies for minimising the waste that needs to be land-filled. The most ambitious of these is the Integrated Waste Management Strategy, an internationally-funded project that’s compiling a 30-year plan for controlling metropolitan waste in the new millennium.

For Peter Novella, head of Waste Management, these are heady times for those involved in his field and he speaks with passion of its civic-minded orientation and scientific innovations – developments which were prompted by the licensing conditions attached to landfills by the 1989 Environmental Conservation Act and 1994 Minimum Requirements document.

‘In the old days landfills were just dumps,’ he says. ‘Those days are gone. They’re scientifically operated and we consider them as bio-reactors.’

Indeed, depending on how far the waste has degraded, it’s possible to excavate newspapers that are still legible after several decades, and recent explorations of the Freshkills landfill in New York unearthed newspapers and identifiable chunks of steak dating to the 1930s.

‘People think that refuse vehicles are magic trucks – that waste goes inside and disappears. But there’s a lot of work in that black bag. Even when a landfill closes, it must be supervised for a minimum of 30 years. So it might be something you put out today and never think of again, but there are people working on the consequences of that waste for 30, 40 years.