Imagine yourself a few grand shy of the sum required to settle your tab and being conscripted behind the bar to discharge your debt. What was once oasis becomes bear-pit: your back to the fridge, you're an open target in an asylum. 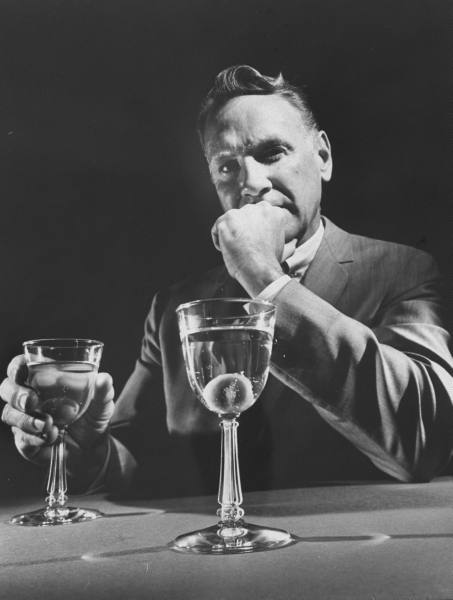 Obeying your thirst, you surge towards them. You're RoboDrunk. They are your skivvies – drinks-vending droids you activate with finger-snaps, bantering yes-men delighted by your sly wit. They are confidantes you suddenly crap out for killing your brandy, and best buddies who fade into the backdrop as extras while, drink in hand (thank God), you rejoin the movie of your life. In a word, they're bartenders.

But first you must power through the resistance of shoulders and breasts, past knots of arbs and balls-talking losers, until you broach the ranks of blackout specialists lining the counter. With cigarette crammed against nose, you lever into position, a suave bidder for a bartender's attention. And there the fuckers are, bobbing and weaving in the rubber-matted trench, their faces unreadable. Your flashed tenner doesn't impress, and excuse-me's are deafened by the music. Finally you ask aloud, ‘Have you quite finished your fucking gay love affair over there?' This elicits reaction: ‘Look, why don't you ... fuck off, okay? ... and getta waitress to serve you.' But I'm a customer, you protest. ‘Customise your arse to a chair, man, I'm not serving you.' Stools scrape, horrid faces orbit your way. You've got the starring role you wanted; unfortunately, it's in a snuff movie.

Such is the immortal stand-off between Bartenders and Barbarians. You've got the bucks, they've got the apocalypse you crave. But in this boozy utopia where you're immersed in frictionless self-gratification you're joltingly reminded of the otherness of the space behind the bar. It's there for you, but in a way it's not: it's got its own agenda, it's a self-contained law unto itself. Momentarily the zones on either side of the lacquered counter cleave apart, and two worlds that seemed one announce their difference.

The root of this paradox about pubs is nothing more mysterious than the dynamics of point-of-sale supply-and-demand. Seller and buyer work chummily together, but there's something mutually predatory, mutually self-involved, in their relationship. They co-habit under one roof, but their separate physical locations engender sharply divergent behaviours and headspaces. Social workers may have suggested to you that, Christ, since you eat, drink, sleep and shit in bars, you may as well also work in them so that you never have to leave. Would it be the same? Look at them –at those lambent altars of inverted bottles, those Mississippi riverboats, and particularly the ramparts bordering them. Behind the bar your piss-up pen looks surreally different. Work behind the lines and you're in a parallel world to the one that's so familiar.

‘They're separate but together,' explains Greg*, a lifer in the hospitality trade. ‘We all think about it, and the way you think about the bar depends on who comes in here.' The phrases ‘taking shit' and ‘dealing with wankers' feature heavily in the list of downers bartenders ascribe to their occupation. It isn't hard to empathise. Imagine yourself a few grand shy of the sum required to settle your tab, and being conscripted behind the bar to discharge your debt. What was once oasis becomes bear-pit: your back to the fridge, you're an open target in an asylum.

You'll have to remember slurred orders of considerable complexity and volume (frequently revised), deliver them instantly, and then face lashing criticism or harangue a drunk who's sidled off without paying. You'll do this while serving a dozen other dipsos simultaneously. Even your attempts to be hospitable could be met with psychotic incomprehension. In response to your invitation to refresh a drink, you'll be asked, ‘Why're you asking me all these FUCKING QUESTIONS?' And while riding the peaks and troughs of business and maintaining consistent service during your nightly ten to fourteen hour-long shift, you'll lug beer crates for laughs. Pay-off comes when a paranoiac flown on ‘karate water' or a ‘big bouncer poes' on DEFCON:1 takes your mere existence as a personal insult. Long after closing you'll cash up to discover you've been stung in sleight-of-hand scams in which a fifty is flashed but a R20 note furtively tendered. Fork up and fuck off.

‘Each night feels like a week of your life,' Andy remarks. Yet in time the requisite skills and crap-deflection become automatic and your outlook changes. You're scoring good tom, largely tax-free (‘For tips,' says Andy, ‘always hit eye-contact when you're giving change, and if it's a babe ... wink'). No longer are you hemmed in by the counter: now bar-area and rolling pub-hinterlands unfold as your domain. Paternally you draw the line, maternally you extend your largesse, energised by hostly enthusiasm for your customers' well-being. As Greg suggests, your sense of self and bar depends on the crowd's charisma: you mirror their buzz, they yours. And on no other night's buzz is as anarchic as Friday's.

‘You're working Friday,' Andy says, ‘but you wanna enjoy it as well.' So pony-tailed Andy and burly Greg, the Brews Broes, work the crowd like a fast-talking comedy duo. ‘You're performing on-stage,' Andy explains. Even in the streets you're hailed ‘like a movie-star. You're the pilot in the cock-pit of this party-machine, and it's exploding.' And where other bartenders might believe in moderation even in excess, Greg roars with laughter: ‘You're here to make sure the customer gets pumped full of booze, pops the legal limit and drives home paralytically drunk.'

Toasted by gratified drunk-drivers, you're also quietly called aside as amateur psychologist. ‘People pour a lot out at the bar, besides pouring a lot in,' says Greg, an observation Andy endorses: ‘A guy I've never seen in my entire life asks me what he should do because his wife won't go down on him. I was lagging in such a no-skaam frame-of-mind I think I told him to clean his cock. The worst part when you swap sob-stories is –hey, you've opened up and made a connection but next day the guy can't even remember it.'

If you're modelling yourself on Syd from Cornwall, you'll watch from a distance as vets from the Pubic Wars commiserate at your Wailing Wall. ‘Guy'll come in. Order double whiskey. Christ, you think, a bit strong for first off. Then the tears start. Oh Christ, here we go again, what's she done this time? Bloke next to him'll get involved, then the woman one up. It's a bloody soapie.'

Indeed, far from being eyeless robots, bartenders are spectators amused as lovelorn Sheilas and broken-hearted berks morph into implacable lechers only a silver bullet between the eyes will stop. ‘You'll be surprised by how far people are willing to go in a full bar,' Greg reflects. ‘I stand there and think, God, do I actually do that when I go out, because I'm probably crashing and burning just as badly. It's amazing. On that side of the bar people think they're so smooth and subtle, but they're actually falling on their faces. You see the moves coming a mile away, you can hear the lines, when you're standing on this side and you've had nothing to drink.'

Nothing to drink, Greg? ‘Everyone's going to tell you differently about how you mustn't drink behind the bar. But have one or two yourself ... I mean, automatically you relax, work better ... optics start breaking, glasses are crashing.' (Dictaphone-warping laughter.) ‘It's the same as walking into a group of friends and you're sober and the ou's are fuck-drunk. They wanna rev, but you're not in their vibe. Same in the bar. You're trying to relate to a pissed guy's story. You've got to believe in his politics and laugh at thekak joke he's fucking up. You're looking at him and try'na figure out when to laugh because, shit, you don't want to piss off a tipping customer. I mean, that's your bread-money, so you want to catch this fucking punchline.'

Thus, in the interests of customer-liaison you get shitfaced yourself. In doing so, you bridge the most trenchant bar-barrier dividing the seller's world from the buyer's, that between sobriety and drunkenness. From fledgling bartender you've come a full circle to pub-mastery. And for barbarians, this is their ‘fucking punchline': the spectacle of a drunken bartender, all the more spectacular because it violates the drinking-on-duty prohibition enforced on staff.

Regulars regularly send Andy on ‘tequila runs', obliging him to match them all drink for drink. ‘Then the barman's the biggest idiot in the place,' he laughs. The parallel world behind the bar retains its otherness; but briefly, pleasingly, it shows its similarity. ‘It's just the customers' way of saying, Thank you, Andy.'

* Names have been changed.