Hard on Tintin's heels, and making a beeline for his shorts, is a monstrosity from the core of white angst: an African super-phallus, cock squared and dick cubed. This is 'Fear of a Black Planet', an exhibition by the Bitterkomix legend, Anton Kannemeyer. 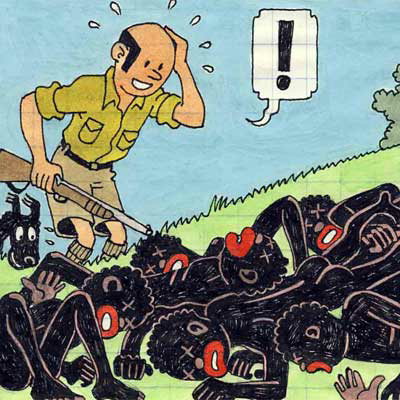 In one of the centrepiece images in Kannemeyer's exhibition Fear of a Black Planet, a middle-aged white man endures his worst nightmare as he is raped by a black inmate in a prison cell. The men are naked. The white man, hairy-legged, holds onto a chair, tears raining from his face. The black man, smiling pleasantly, burrows in behind him to the hilt. In chatty, ‘oh, I say’ tones, he reacts to something whitey has said. ‘Jan van der Merwe?! Well, how do you like that for a coincidence? He was my lawyer too!!’

The white man has been gulled by his own prejudice. Blacks aren’t primitive Sambos. They are also likely to retain attorneys and such, you know, so threatening to call a lawyer won’t impress anyone, let alone scare them off your arse. Social capital like that has been democratised, and the white man – jailed for his crimes and bereft of special defences – has come in for a lesson about equality.

As the exhibition’s title announces, this is a post-1994 ‘black planet’ where blacks are politically ascendant and whites threatened by loss of status. Kannemeyer’s approach is duly contemporary in scope, even continental rather than purely local. Jacob Zuma is there, as are the new fat-cat élites and a pally-pally Mugabe and Mbeki, although – tucked away in an alcove and corridor in the gallery – they felt unassimilated to the show’s ruling energies. More widely, and trenchantly, Kannemeyer engages with strife in Uganda, Liberia, Rwanda and elsewhere. A gruesome African tableau is on offer, and Kannemeyer portrays a gaggle of Westerners recoiling from it with comic-book alarm. ‘Oh dear God!’ they cry en masse.

It’s an especially telling image, because it emphasises the focus of exhibition. Not so much the ‘black planet’ as the ‘fear’ of it – fear meaning ‘white’ fear, meaning racist fear, meaning ideological perception (meaning false consciousness, delusion, disconnection from the real, illegitimacy). Kannemeyer mounts an excoriating attack on the racist imagination, but under his whip hand there is nothing airy-fairy about the content of its ruminations, and despite the exhibition’s nouveau approach, the story it tells is an old and atavistic one. Here, racist ideologies are desublimated, made to rot down to the level of biology, to the brink of the revulsion which animates them: rats, flies, scuzz, decapitated hands, a slobbering pigfest of bulbous genitalia.

Kannemeyer’s signature is the back-handed homage to dear old Hergé. So it is that Tintin, and the Tintinesque, is everywhere a-prowl, only now the youthful colonial explorer is all growed up and shagged out. Tall and bald except for the tufts of hair above his ears, he has become a suburbanite in T-shirt and sandals, Homo Bergvliet glumly attending to the white man’s burden of watering his garden – in this case an African continent from which rows of black penises are sprouting. It is an idyll of tamed African instinctuality, but by the next image all of that lies in tatters.

‘Oh my God!!’ Tintin is shouting. ‘These black dicks are outta control!’ His hosepipe has morphed into an eel-like blue-black schlong tough enough to strap around the wheels of an SUV, and the turn of affairs pitches Tintin into post-colonial flight. Later, he is seen on the move, his pith helmet floating in his wake. Hard on his heels, and making a beeline for his shorts with its bulky, dewlapped glans, is a monstrosity which has emerged (no doubt) from the very core of white angst. It’s a kind of African super-phallus, a griffin winged and clawed, a phantasm that is cock squared and dick cubed. Its tail is a penis, the dick has a dick, and it’s charging like a Pamplona bull. ‘Run, Daddy, Run’ says the caption, replaying the family’s screams in sardonic voice-over.

Daddy Tintin doesn’t get very far: Daddy Tintin’s dread is consummated when it is he who is raped in the prison cell. The scene is punitive, fraught with lekker-kry Schadenfreude. He is being punished for his racism, ironically enough, by precisely the thing his racism made him fear; his appeal to social superiority over his black rapist (having an attorney on his side) only confirms that his view of the ‘black planet’ is outdated, caricatural, and well-deserving of poetic justice. Just a bunch of blacks; my shyster will chase them away. I’ll stay pristine, physically untouchable and spiritually uncontaminated by Africa’s excesses.

The image isn’t without complex ambivalence. It would perhaps be inaccurate to say Daddy Tintin is punished for his hypocrisy, because it makes him appear too Machiavellian, too self-aware. He is punished for his innocence. Kannemeyer’s Daddy Tintin is a child lost in an adult body, a weakling cry-baby everywhere convinced of his purity. Black Gynaecologist shows a white woman with her legs raised up in stirrups. Her eyes are closed and her face is saintly; the black doctor operating between her thighs scowls in concentration and, indeed, distaste. Like the woman, like the Westerners recoiling from Africa, Tintin cleaves, it seems, to a central belief. You could explain it by way of Hegel’s notion of the ‘beautiful spirit’, but street-speak is best for summary. Delicately put, the proposition is this: They think their own shit doesn’t stink.

Kannemeyer’s is an art of transgressive juxtaposition, violently yoking together ideas usually kept apart and yielding effects that shade in and out between nihilistic liberation and moral chastisement. Tintin is introduced to his worldliness, luminous nursery-room colours are suffused with horror, and Africa’s atrocities explored the better to rub Western noses in their disavowed ordure, their complicity in these scenes of otherness. The profanatory high note comes in the form of a gigantic canvas that shows God surveying a landscape of African misery. With his arms spread open, half-way reminiscent of Michelangelo, half-way of Tony Soprano, the white man’s God says, ‘Yo, dumbfucks! Which of you miserable cunts will suck my holy dick today?’

Fear of a Black Planet is less an exhibition than an installation, making expert use of gallery space to set up its themes, tell its stories, and transform the rooms into the zone of a radioactive psychodrama. The images showing God’s curse and Daddy Tintin’s rape face one another across the main hall, gesturing at their mutual reinforcement, mutual modification. Tintin is God’s right hand in Africa, the carrier of his law, yet also his plaything. Detested for his innocence, Tintin is perhaps reviled most sadomasochistically for his craven trustingness in authority. The faith he placed in his attorney – his intercessory to The Law – is misguided, and he and his rapist, stuck in the salt mines of an imperfect Creation, can share at least the fraternity of common oppression.