Novelist, poet and painter Zakes Mda speaks about prophecy, writing, TV philistines, bee-keeping – and The Heart of Redness. ‘There are so many stories to write in this country that one can't afford to fool around waiting for inspiration.’ 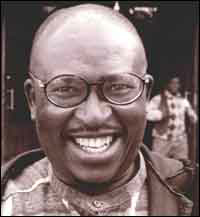 WORLD ONLINE: Zakes, you're an internationally acclaimed South African playwright, novelist, poet, painter and academic. Your novel Ways of Dying won the M-Net Book Prize in 1997 and most recently you've published Heart of Redness. But pray tell: What are some of your other, less well-known claims to fame?

ZAKES MDA: I compose music. I own and operate a record company, Awunanga cc, which recently produced Richard Nwamba 's CD Urban Culture. Nwamba is the producer and presenter of The African Connection, a programme of the music of Africa and its diaspora on SAfm and on SABC2. In fact my film production company, Thapama Productions cc produces The African Connection on SABC2, in addition to many other programmes ... e.g. the SABC2 miniseries Secret in my Bosom scripted by Gomolemo Mokae, an international children's documentary series The Big Treasure Chest for Future Kids and some religious documentaries, also for SABC2. I am also involved in bee-keeping in the Eastern Cape on the Lesotho border. I own a mountain there with aloes. Together with the villagers we have formed a bee-keeping collective.

WORLD ONLINE: Your recent novel Heart of Redness has received excellent reviews. What's it all about? Let's have a brief preview.

ZAKES MDA: It is a love story set in the Eastern Cape in the 1850s during the days of prophetess Nongqawuse when there were conflicts between those who believed in her prophecies (that the Xhosa people would slaughter all their cattle for on an appointed day the dead ancestors would arise with new cattle) and those who did not believe. The ripple effects of these conflicts continue with contemporary characters (set in the 2000s), the descendants of the 1850s characters. So does the love story. But the conflicts are no longer about prophecies and other religious matters. They are about the protection and preservation of the environment, of cultural heritage and other developmental issues.

WORLD ONLINE: The title seems to be an intertextual reference to Joseph Conrad's Heart of Darkness, the narrative of a river voyage into the Belgian Congo during the colonial era. Conrad has, of course, taken flak from contemporary critics for perpetuating a colonialist mythology in which Africa is seen as a barbarous and evil ‘dark continent’. Does the title of your own work suggest that you are in some way addressing and re-working these issues?

ZAKES MDA: My book has nothing to do with Mr Conrad's novel. I have never even read Heart of Darkness. My title comes from the Xhosa expression ‘intliziyo yobubomvu’ which means ‘the heart of redness’. When the Xhosas say somebody is ‘red’ or ‘ubomvu’ they mean that he or she is a heathen or is ‘uncivilised’ (in the Western sense, that is). This comes from the traditional dress of the Xhosas, which is red from red ochre. The missionary educated Xhosas of the past regarded those Xhosas who still wore this traditional dress as ‘heathens’ or as ‘uncivilised’. In Xhosa, therefore, when we talk of a heart of redness we are talking of a place where they still value and practise Xhosa traditional culture, which was misguidedly regarded as ‘uncivilised’ by mission-educated Xhosas and by the colonial masters.

WORLD ONLINE: What are the aspects of Heart of Redness of which you are the proudest?

ZAKES MDA: Everything. I wrote everything in there and I am proud of it all.

WORLD ONLINE: Zakes, kindly tell me a little about your background. For instance, have you always been a writer or is this something that developed later in life?

ZAKES MDA: I have always been a writer and a painter. My first published work was a Xhosa short story titled Igqirha laseMvubase (The Doctor of Mvubase) in a magazine called Wamba in 1962. I was thirteen at the time. I come from a family of artists. My father was a fulltime Attorney-at law and a part-time painter and music (both orchestra and choral) conductor. My three brothers, who are all lawyers, are also painters.

WORLD ONLINE: I'm sure this is a question you've been asked many times, but please tell: How do you go about writing your novels? Are you tremendously self-disciplined, setting yourself fixed working hours and the like, or is writing for you a more chaotic affair, in which you wait for the proverbial visits of inspiration?

ZAKES MDA: I cannot afford the luxury of waiting for inspiration. I am always inspired. I am currently writing a novel titled The Madonna of Excelsior, which I am going to complete in March. But as I am writing this novel I already have four novels in my head and in bits and pieces of papers waiting to be written. There are so many stories to write in this country that one can't afford to fool around waiting for inspiration or having a writer's block. I would love to write every day, but some days I am distracted by other mundane things, such as television production meetings, or meetings with the philistines from the television networks, etc.

WORLD ONLINE: What do you believe to be the major themes and preoccupations that recur in your writings?

ZAKES MDA: It's for the critics to say. I write about anything that strikes my fancy. I haven't analysed my work to see if there are 'preoccupations' or themes running through.

WORLD ONLINE: Who are the writers – contemporary and classic, local and international – whom you have found it profitable to read?

ZAKES MDA: JM Coetzee, of course. And another writer with whom I am in love: Yvonne Vera. Then there are Dany Laferriere and Garcia Gabriel Marquez.

WORLD ONLINE: Which cultural and political trends in South Africa do you find particularly troubling – or exciting?

ZAKES MDA: I would like to see more tolerance.

ZAKES MDA: Writing, of course. What else? Oh, and I am passionate about South Africa. About living here. Over the past 35 years I have lived in many countries of Africa, Europe and the USA. But I have never had such great a time as I am having here today. I have never been so productive artistically. I am having a wonderful time in this country, so much that whenever I have an engagement in Europe (which is once every two months or so) I always make it a point that it never takes more than one week!

WORLD ONLINE: A last question: What projects are you currently pursuing, and what lies in the future?

ZAKES MDA: Bee-keeping with the villagers in the Eastern Cape, kindly sponsored by Eskom Development Foundation. Then completing my novel The Madonna of Excelsior, and my next three novels after that, namely: Ululants (set in Lesotho), The Whale Caller (set in Hermanus, Cape) and Rickshaw (set in Durban). There are a few television projects, including a new season of The African Connection, an SABC2 drama called Kopanong, and a magazine programme called Book Club.