The Zen Cool of Yobspeak

Swear words are fascinating. Just look at the king of the cusses: Fuck is unfuckingbelievable. Fuck will get down to business (‘what the fuck’). Fuck won’t care (‘who gives a fuck?’), and fuck will dare to dream the impossible dream (‘fuck everything’). 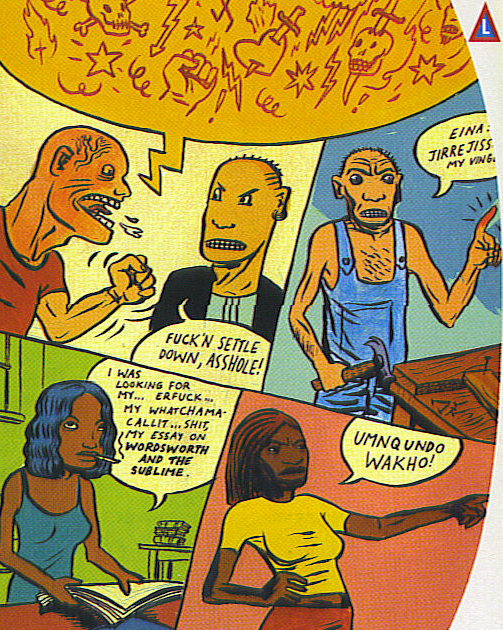 Swear words are defined as socially taboo utterances, and in less easygoing times you could have been broken on the wheel for saying them. But for the alcoholic, drug-dropping and chain-swearing yob of modernity, the word taboo is more likely to bring to mind a new Mexican beer than a forbidden deed. Where the Israelite would have thought twice about taking the Lord’s name in vain for fear of a stoning, the already-stoned Generation Effer blasphemes as a throat-clearing exercise before lurching into speech that would have had Victorians calling in an exorcist.

As old taboos have sagged and collapsed, swearing has flooded into every corner of language use. Hear the kiddies cuss. Watch the black-gowned graduates stumble and swear. Marvel at the manager who winds up her hype-session, ‘It’s so exciting it makes you want to pump piss, hey?’ Thrill to the greetings between passing acquaintances, ‘Howzit, you evil bastard’ and ‘Fuckin A, and you?’ Applaud Australia, land of the Technicolor yawn (Oz for vomiting): in one drunk-driving case heard there, the words clot and dickhead came thick and fast, not from the defendant but the magistrate.

For contemporary yobs, swearing is synonymous with speaking, yea! with the act of breathing. Because swear words dominate in yobspeak, they have to shoulder many linguistic duties traditionally assigned to other classes of words. Terms of abuse become, for instance, jovial greetings. Swearing even fills the spaces between words. Where pauses were once bridged by ers and umms, casual profanity now does the job: ‘I was looking for my ... erfuck ... my whatchamacallit ... shit, my essay on Wordsworth and the Sublime.’

Take fuck as another example of semantic versatility. As everyone knows, you don’t fuck with fuck. Never mind The Beatles: it’s fuck who’s probably more popular than Jesus Christ.

And, boy, does fuck get around. TheKama Sutra can take lessons from fuck when it comes to positional flexibility. Fuck is unfuckingbelieavable: fuck will take you on, fuck will just do it (‘what the fuck’), fuck won’t care (‘who gives a fuck?’), fuck will dream the impossible dream (‘fuck everything’). But fuck will always help you out. Depending on your intonation, the mere word-sentence ‘Fuck’ will express, among other things, outrage, curiosity, gratitude, bleak acceptance, and mystical wonder. Try it yourself. C’mon ... just this once.

But why would you want to? Why not just say no? You can do other words, can’t you? Quit, pour it in the drain, flush it down the can. Where’s your respect for self and other? Really, why do it?

The commonplace explanation is that swearing is a way of venting anger and frustration. You hit your finger with a hammer and instead of hitting the hammer, you retaliate with a juicy oath to high heaven. This displays your emotional state and releases aggressive tension rather than letting it build up to the point where, say, you’re ready to grab a hunting rifle and stomp into the nearest primary school. Following such logic, swearing in fact ultimately contributes to social harmony by preventing overreactions of this kind.

If swearing is socially useful, it’s also regarded as socially excusable when the provocation is extreme enough to warrant it. The proviso is that you still need to adhere to the unstated rules of different contexts. Rank blasphemy, for instance, is bad form when shooting the breeze with a minister of religion, unless it’s your explicit intention to give offence, but if you keep the company I do it’s no big deal with your buddies, who won’t even notice.

You have to consider as well that while taboos weaken in one region, they regroup in others, notably in the domains of gender, ethnicity and alternative sexuality. Swearing might keep the peace, and may well be the great democratic leveller equalising the professor and pit-dweller, but it can divide as much as it unites. Feminist theory has emphasised how masculine prejudices against women are encoded in language: a male speaker’s sexual swearing, with its degradation of women as body parts, will invite the counter-insult, sexist. Likewise, het jibes like fucker are perennially in fashion, but het-usage of queer and the like is seriously uncool.

Paradoxically, many women, gays and blacks have adopted the slurs bitch, queer and nigger/kaffir as rallying banners to scandalise mainstream society with their self-styled otherness. You can wear T-shirts saying ‘This bitch bites’, study Queer Theory, and toe-tap to Niggers With an Attitude. Het Caucasian males might misconstrue this as fresh licence for them to join in, but it doesn’t cut both ways: peppering their speech with kaffir may land them a crimen injuria rap or end a career in sports-coaching.

The point is that taboos change, and that swearing, oddly enough for all its characteristics of taboo-violation, is rule-regulated verbal behaviour which can be more or less appropriate to the situation, and which is most ‘properly’ used to convey distress or to abuse the cause of your exasperation.

Very simply, there are two rules to follow to keep your ‘occasional lapses’ in the bounds of excusable indecency. The first is that the strength of your expletives should be proportionate to the seriousness of the duress you’re suffering. (Yeah, sure.) The second is that you’re supposed to bear in mind to whom you’re speaking and censor yourself accordingly. The principle is that the greater the social distance and formality between you and your addressee, the ever-milder your oaths and the stronger your self-restraint. Neglect this maxim and you risk offending your listener and exposing yourself as the arsehole you are.

So even when breaking the rules you have to obey them. Thus, the toddler swears because it’s learnt that these are the formulas you use to express annoyance. Yet talking about rules might explain how people swear, but it doesn’t reveal much about why: why those words? Since the toddler doesn’t appreciate the full meaning of what it says, in theory it could say anything at all to suggest anger. In theory, we could all be happily unhappy shouting Double-plus ungood! if the phrase had acquired notoriety.

It wouldn’t be the same. Swearing is like poetry or mathematics: it consists in primary form of metaphors and equations, such as ‘He’s (figuratively like) a piece of shit’, or ‘she = shit’. Overtly or implicitly, dirty words compare the target of abuse with dirty, valueless, contemptible and potentially hazardous things. These unmentionable references to bodily waste, genitalia, sexual activity, deformation, primitivism and animality, point fundamentally in one direction: to everything that’s regarded as standing outside civilised culture, and that culture thinks it must shamefully eject to maintain its self-respect. Why is a prick a prick? As they say, when you go hard in the pants, you go soft in the head: ‘animal’ passions oust ‘human’ rationality, making you an ‘outsider’ subhumanly insensitive to consequences.

Outside the city walls is the garbage heap of the body, the wilderness of desire: these calls of Nature are cublicled off as taboos, which swearing reopens. When you describe persons, things and situations as shit, you’re equating them with substances best dumped outside the city-limits. But you’re not just saying something, you’re doing something, and you’re doing it when you’re so frustrated or swamped it’s all you can do to regain a sense of control: symbolically, you’re casting them out of society’s protection into oblivion to free yourself. And if you blaspheme to boot, it’s as if, in recognition of your mortal limitations, you’re invoking a tetchy divinity who’ll assist you. In the magical meaning of the word, you’re cursing them: Goddamn you to hell.

This might sound too exalted to apply to yobspeak. For one, yobspeak is for everyday, not just special occasions. Whether vexed or tranked out, whether witnessing Armageddon or waving a fly away, the yob’s verbal style is the same. For another thing, yobspeakers swear so heavily that taboo words become meaningless and lose their violatory force. Swearing makes picturesque speech; but normally do you literally picture stinking bastards or a fucking computer? The more you swear, the less it means. For all its ferocity, modern swearing seems to make an about-turn from straight talk to soft talk. Yobspeak is weirdly euphemistic in the way it can, for instance, sum up an infinity of distress with the self-insulating dismissal, ‘Shit happens’, where other words might convey the realness of that distress.

But this is the Zen cool of yobspeak. In an entrapping world of non-stop annoyance, boredom and crisis, swearing says, ‘Ah, fuck all that: shit happens – relax and take it as it comes.’ It might be impossible to picture the things to which swear words refer, but swearing nevertheless has the overall imaginary effect of casting unwanted situations away and reducing their menace to insignificance. Swearing shows a defiant spirit who’s struggling against the world’s ills – and, sometimes, even humorously accepting of their inevitability. So salute lowly yobspeak: cynical and irreverent, it displays lordly detachment.