In the Country of Last Things

The writer Ashraf Jamal has the voice of an angel but speaks of things demonic and desolate. Take his play Severance, for instance. A woman contracts AIDS and her brother has sex with her so he can die with her – but AIDS itself isn’t the real horror. 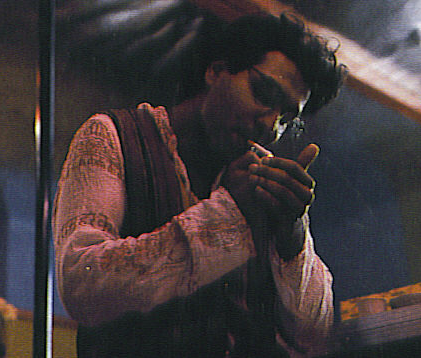 Playwright Ashraf Jamal is flipping through a pad of photographs, and the portraits they reveal look cindered, burnt black and grey by the intensity of their subjects. In one image, a blood-streaked Billy Idol-lookalike leers into the camera. In another, a whacko with a shell-shocked, thousand-yard stare clutches a fire extinguisher, while the next displays a nurse – darkly angelic, her eyes lowered and hands clasped downwards in inverted prayer.

One and all look as mad as shithouse rats. Family snapshots? A moot point – these photographs from Jamal’s latest production, Severance, depict the spawn of his challenging artistic vision, and it’s taken them a decade to assume carnal form.

Severance was written in 1991, at a point when Jamal had returned to South Africa after studying in England, Canada and the USA. Thoroughly versed in the work of Continental theorists and philosophers ranging from Gilles Deleuze to Georges Bataille, the immensely cerebral Jamal took up a lecturing post in English at the University of Cape Town. Never one to keep a lid on his projects, Jamal would read extracts of the play to colleagues as it was being written. He’s a passionate speaker, always at the ready to haul out his latest writing and quote from it aloud in his mellifluous voice. Now, nearly a decade later, Severance – which he calls ‘my skeleton in the closet and my most significant play’ – has resurfaced as a discussion point.

‘I wrote it when we were in a Dark Age of political correctness and political transition,’ he explains, ‘and I wanted it to be an antidote to the moral majority. Coming back here was like stepping into Dr Zhivago – everyone called each other “comrade”. It was a bunker headspace, but I think this play manifests the real seam of a society beyond the hubbub and wish-fulfilments. It speaks to psychic discord.

‘Severance might’ve been written at the tail-end of the Eighties but it was an untimely work, and the points I made then are more significant now in terms of where the country’s experience has gone.’

On the phone the day before our interview, Jamal sounded strangled by the tension of final rehearsals. What would he be like in an interview? Gibbering ruin? Megalomaniac? On the contrary.

Elle once ranked Jamal in its hit parade of eligible bachelors, and there sat the old charmer, peacefully sipping his second beer of the morning in an Observatory café and chatting about death, chaos and confidence like the Mike Lipkin of the Dark Side.

‘Severance embodies a desolate, comfortless place,’ he says cheerfully. ‘It’s such a thrill to have it come to life, finally to own the words, to become them. The play is my New Year’s resolution. It’s a dare all the way – I’m happy to stick my neck out. This creature has arrived in the world and I’m privileged to have it happen now.’

In `91 he was depressed; in `99, aged 39, Jamal is ‘ridiculously happy’ with his family and young daughter. ‘Like everyone else I love reading, but it’s important that one’s relationship with artistic endeavour isn’t vicarious and that one participates as well. For me art’s tied up with belief in oneself, with inventing oneself and moving beyond one’s limits.

‘Besides, I want my daughter to feel that she has a father who’s lived a worthwhile life – a life that’s been a gift to the world. I write nothing for myself. Everything’s a gift.’

Often an unreciprocated gift: for the first time in his theatrical career Jamal’s received a production budget, thanks to his producer Zayd Minty. ‘I’ve always relied on my ingenuity,’ he says – a case in point being his stint as artistic director at the Black Sun theatre company, ‘our equivalent of La Mama, the off off-Broadway space.’ There he earned R10 a day for the nine months during which he directed four plays and produced five.

Still, he reflects, ‘The Black Sun was my resurrection, and I managed to catch the tail-end of one of the strongest marginal theatre forces in our country.

‘My involvement came as a direct result of a nervous breakdown I had in Grahamstown after a terrible review of my play SA Metal. I walked to the hall literally clutching the walls, to discover that my last show had been cancelled. After that I thought – fuck theatre, and applied for a post at the University of the North, which I got.’

In the month before Jamal assumed the post, actor and writer Eric Miyeni urged him to join the Black Sun, and Jamal promptly scrapped his planned comeback to academia, with which he’s had a deeply ambivalent relationship. For him, Miyeni’s invitation was ‘a vindication. I’ve had a commitment to arts in this country since I’ve been here, and I believe I’ve paid my dues.’

His commitment has shown itself in various ways: Jamal rates Sky and Czech and SA Metal among his theatrical highlights, and he’s co-authored Art in South Africa, as well as having written a novel, Love Themes for the Wilderness, soon to be filmed in a co-production by local companies Big World Cinema and Giant. Jamal has drafted the script, and the film is to be directed by Ian Gabriel, who has a 17-year-long track record in international commercials.

Jamal’s future plans include co-authoring a book on local theatre and directing a film of Severance. He’s also penning the lyrics for an opera and will be taking singing lessons himself. ‘Voice is the only way I’ll save myself from a decadent, debauched life,’ he drawls, ordering another beer. ‘Voice is close to breathing, which is close to healing. It’ll be the restoration of my dilapidated beauty.’

Jamal can be riotously funny when he’s in self-deprecation mode, but Severance promises to be anything but light comedy. Nominally, it’s an AIDS tragedy: a woman contracts AIDS and her brother has sex with her so that he can die with her.

‘But AIDS isn’t the horror in the play. It’s the death instinct – the irrevocable rot of every faculty, the struggle to befriend every breakdown.’

The protagonist of Jamal’s novel inhabits ‘the country of last things’, and ever the shamanic nomad, Jamal himself criss-crosses this landscape, which is his defining artistic environment. ‘It’s an exorcistic space,’ he says, and speaks of ‘the necessity to pass through decadence. You can’t absolve yourself with the ease our society expects. Art galvanises terror, but the way it’s done also protects people. Art’s a preventative fire.’

Demonstrating the death instinct, Jamal accepts a cigarette. He finds them ‘disgusting’, but adds with a wink, ‘The only way to solve the problem is to remove the filter – and inhale.’