Pieter Dirk Uys is a legendary satirist, but who are his targets? ‘Me. My main target is me. Who the hell am I to talk about you? But if I show you ten of my fears, you’ll recognise two you share.’ Uys reflects on those terrors, the K-word and N-word. 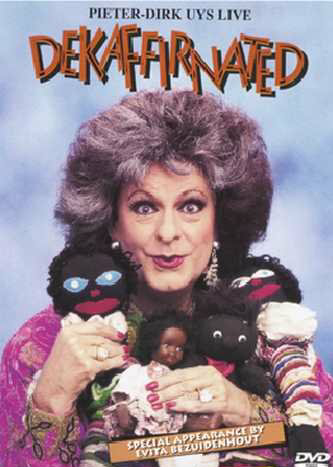 ‘Who’s writing all this crap? Is it me?’ asks Pieter Dirk Uys in exasperation at South Africa’s absurdities. An apartheid-era cabinet minister, for instance, is reinvented as a titan of the struggle; or a former SAP torturer runs into one of his victims and tells him: hell, man, forgive and forget. The torturer scuttles off. He’s sporting ANC colours. He’s also a bodyguard to Nelson Mandela.

‘I can’t make up things like that,’ says Uys. ‘It’s one absurdity loaded on another, which is why I’m not a satirist. The world’s so mad it’s enough just to report the truth.’

A further irony is even closer to hand. After having taken Dekaffirnated on tour to Europe and New York, Uys (who lives in nearby Darling) is back in Cape Town for the show’s run at the Baxter Theatre. While he describes living in the only NNP-controlled province as ‘God’s punishment to me for wearing women’s clothing’, Uys finds that the NNP’s regional control by coloureds is ‘wonderfully funny’.

Indeed, ‘rewriting prejudices’ is central to Dekaffirnated, which explores the ‘enormous optimism and controlled disappointment’ Uys found during his election-awareness campaign. ‘Dekaffirnated is the first minefield of a show since the ones under apartheid. It’s about words: k-words, n-words, about the power we give them to frighten and humiliate people.’

If the show examines the violence of language, such violence is also what defines its narrative and its fictional space. With Van Riebeeck’s arrival, the people of the south are denigrated as ‘kaffirs’. The word is literally a curse: it blights the country and is lifted only centuries later, which accomplishes the process of ‘dekaffirnation’ referred to in the title.

This process apparently involves the two-fold strategy of summoning up the violence of language and taming it, of naming the offensive words and then shifting their meaning so that the sting is drawn. As in the title, the k-word (or any other taboo signifier of racial division) is brought into the open, the better to be neutralised and ‘decaffeinated’ by the satirist’s art.

A risky procedure, and in London Uys alarmed his producers when he proposed taking a golliwog on stage. ‘I said don’t ever say “you can’t” because I worry when you’re frightened by something we should talk about. I used my golliwog but called him “my little co-star”. Whoever was offended by the word “golliwog” was thinking the word themselves. I didn’t give it to them.

‘You know, I want to offend everyone but I don’t want to upset anyone. It’s a case of focusing carefully from country to country. The British reaction was different to the South African. In Britain there are many black minorities who’re marginalised by racism; here we have a black majority with a sense of humour and great confidence. You can get away with some very dark humour, which you can’t do in other societies.’

What about his American reception? As always, Uys’s alter ego, Evita, won the day. ‘After three weeks in New York you don’t have the authority to speak about their lives. Whereas I said things that made the audience frown, Evita could put her finger in the pie and everybody listened; when I did it, it was like, “Fuck you, man!”’

Would this show about South African follies have been a smug, feel-good experience for Americans? ‘No, no,’ says Uys. ‘I didn’t give them the chance. I also ride on their issues, their fears. In the comedy of prejudice people laugh at their prejudice since they recognise its absurdity; suddenly they stop laughing because people are watching them as much to say: Why are you laughing?

‘It’s wonderful to make people laugh at things that frighten them. They laugh because they realise something’s 20 inches high and not 20 foot … but that doesn’t make it any less lethal.’

Uys thrives on this combustible mixture of horror and laughter, of high seriousness and comedy. In conversation with him, the throwaway aphorisms are all there (‘Then we called it policy; today it’s scandal’), but the air around him seems to crackle with the planet’s seething energies, and his talk is about fear – universal fear.

If Uys has long been a home-grown Zeitgeist, technology is allowing him to go global. ‘In Darling I get news on the hour from satellite TV, so I know exactly when the world’s ending. The world’s become a village, meaning that people share the same fear: fear of losing jobs, fear of violence, fear of opinion, fear of their children. Someone farts and the stock exchange collapses. So my targets have been simplified – and become more dangerous.’

Who are his targets? ‘Me. My main target is me. Who the hell am I to talk about you? But if I show you ten of my fears, you’ll recognise at least two you share. The things I want to share with audiences are things I’m passionate about – hypocrisy, and stupidity, which reinvents itself every day. I don’t have to wait for material. One can just hook into the madness.

‘I’m a reactor, not an actor. No show’s a replica of another because that would be acting. I don’t have a script, I don’t rehearse: I have a structure, and much of the material reflects the headlines of the afternoon. If it’s not going to be as live as Larry King, why should you see the show?’

The world’s in motion, and the Zeitgeist has to move ever-faster in order to assimilate fresh horrors and cathartically rework them for audiences. ‘The show is a barbed-wire surround for material that’s always changing,’ Uys says, and it’s intriguing to hear him describe the space of performance with such a jittery sense of danger: a ‘minefield’, he calls it.

In Dekaffirnated, the utterance of the k-word creates a cursed earth, one which, internal to the show, serves as a microcosm of the cursed earth outside. Performance is a contentious space, always in process, but also the scene of an exorcism. Uys, the high-tech shaman plugged into CNN and Sky, draws the global ghetto’s energies into himself and expunges horror in laughter.

And if he observes South Africa’s – and the world’s – monstrosities and wonders if he’s writing it all, one could perhaps reply that it’s the world that’s writing him.